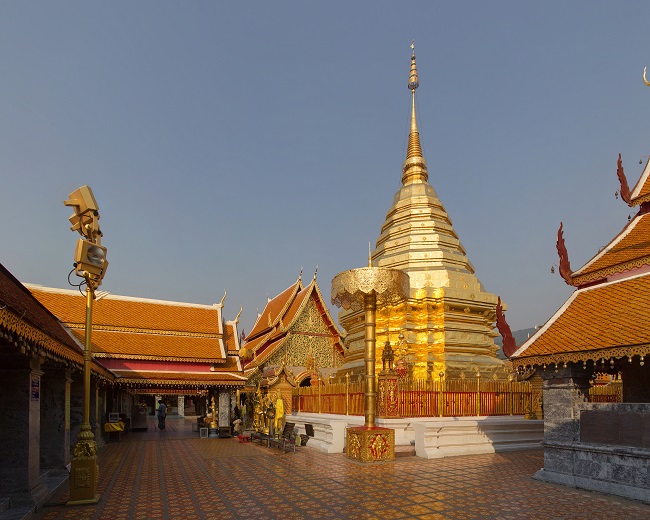 In the latest edition of Overseas, former ROSL Hong Kong Branch Chairman Paul Surtees gives us his reasons for choosing Thailand, specifically Chiang Mai, as his home in retirement.

Called ''The Rose of the North'', Chiang Mai is located in the far North of Thailand, some 700km from Bangkok. The picturesque old city (downtown) is still surrounded by a moat and, like York in Northern England, still has extensive remnants of the old city walls and gates. A good way to travel there is to take a private compartment on the overnight train from Bangkok. It was once the capital of a local Lanna Kingdom. Surrounding the town are forested hillsides and farms (Chiang Mai-grown coffee is famous) and mountainsides.

What inspired you to retire to Thailand?

As a young British man, living in London, I often visited one of my uncles, who retired to a beautiful spot facing Lake Leman in Switzerland, where his neighbours included David Niven and Charlie Chaplin. What gave me the idea to retire overseas, when the time came. The wonderful book, The Story of San Michele by the Swedish doctor Axel Munthe recounts his adventures working in the cities of Paris and Rome (where I often used to work, as well), leading up to his retirement home at Anacapri in Southern Italy, also inspired me – all the more so after I had visited his lovely villa there. There are many attractions to foreigners settling here in Thailand, but to my mind the most important is the charm of the local people; Thai people are generally very gracious.

My work, in the fields of tourism, journalism and education has taken me to many cities, including most of the European capitals, many parts of the Middle East and here in the Far East I have worked in Mongolia, Tibet, Peking, Shanghai, Macau and (for 20 years) in Hong Kong. Bangkok, with a population exceeding eight million, is an exciting city to visit, but too similar (in terms of being very busy) to Hong Kong for me to want to retire to the Thai capital. Instead, the comparatively ''green'', laid-back and quieter Chiang Mai, with a population of under a million, became my choice. It has many of the facilities of a big city, whilst retaining something of the relaxed atmosphere of a country town.

How long have you known Thailand?

Travelling from my then-workplace of Jeddah in Saudi Arabia, I first toured Thailand – including Chiang Mai – back in 1994. I immediately fell in love with this ''Land of Smiles'', and dreamed to live here one day. I later revisited different parts of Thailand many times, including working in Bangkok, until I at long last found a house here in Chiang Mai and moved in five years ago.

What can visitors do in Chiang Mai?

Younger visitors often enjoy adventure sports here. Near the town are opportunities for trekking, ziplining, whitewater rafting, go-karting, paint-balling, zorbing, bungyjumping, shooting, mountain biking, mountain-climbing, safaris, and more. You can also visit a nearby elephant camp, snake farm, tiger camp or a crocodile camp, to get close-up pictures with each of these animals; a big attraction to families with young children. Older visitors often tour the many fine old Buddhist temples located all around the town. There are several interesting museums too; plus a small selection of art galleries and antique shops here. Chiang Mai boasts a wide range of good restaurants serving the cuisines of many lands, including Northern Thai specialities, such as my favourite – the spicy Chiang Mai sausages. I once tried here the rather exotic crocodile steak! You can also take drinks or dinner while floating in a boat going down the river. The nearby hill tribe villages are also well worth a visit, displaying their own special cultures and hand-made attire, from their origins in nearby countries, including from the highlands of neighbouring China, Burma and Tibet. Thailand grows a vast array of delicious exotic fruits, some of which would be unfamiliar to most foreign visitors; these can be found in our outdoor markets and in specialist fruit shops. I recently attended a lavish government reception here, where the sumptious and tasty flower-decorated buffet included several varieties of exotic local fruit: all exquisitely hand-carved to resemble flowers. Another category making up the visitor numbers is that of medical tourism. Chiang Mai has many world-class hospitals and many foreign people come to Thailand for medical or dental treatment – which is generally much cheaper here than it would be in their own homelands. And then very many foreigners, including me, choose to retire to Chiang Mai! 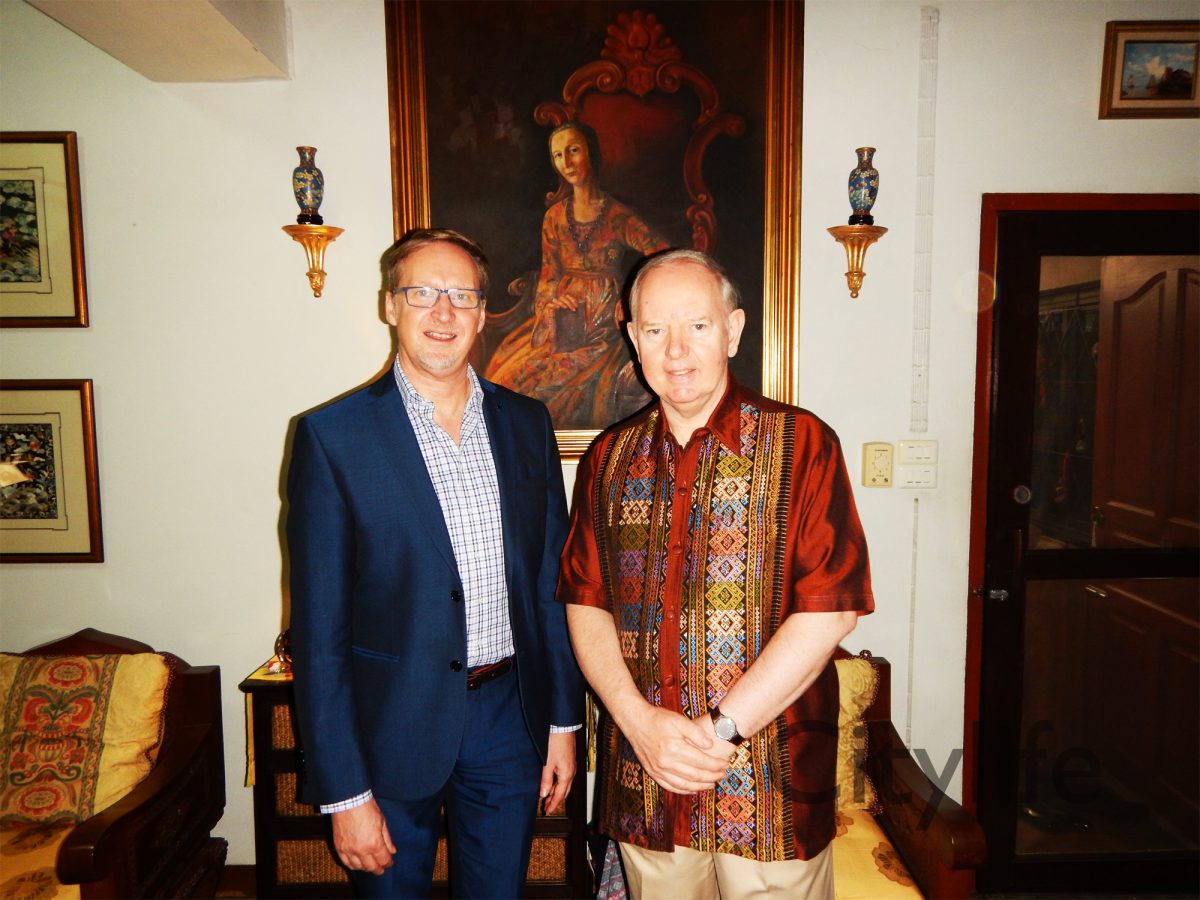 Paul Surtees (R) entertaining the British ambassador at his home.

What has changed there, over the years?

Not so many decades ago, Chiang Mai was something of a quiet backwater, which was one of its charms at that time. However, this town has, over recent decades, expanded well beyond the small original area enclosed by the moat. My own area of residence, Nimmerhaemin Road, was mostly farms when I first visited it. Now it is fully built up and has become the Soho of Chiang Mai, filled with guesthouses, hotels, bars, youth hostels, tourist shops, apartment buildings, coffee shops and restaurants. There are also several new and stylish shopping malls located around the city, these days. the provision of more international flights directly into the city has greatly increased visitor numbers over the last few years. If staying downtown, a visitor can walk to many places of interest, as the central city areas are of limited size.

When is the best time to visit?

Our peak tourist season runs from November to February. At that pleasant season, we have cooler mornings, blue skies, white clouds and bright sunshine, but it is then not too hot and with not much rain or humidity. There are many cultural festivals celebrated here, including the Western, Chinese and the Thai new years, and the lovely Flower Festival held here each February.