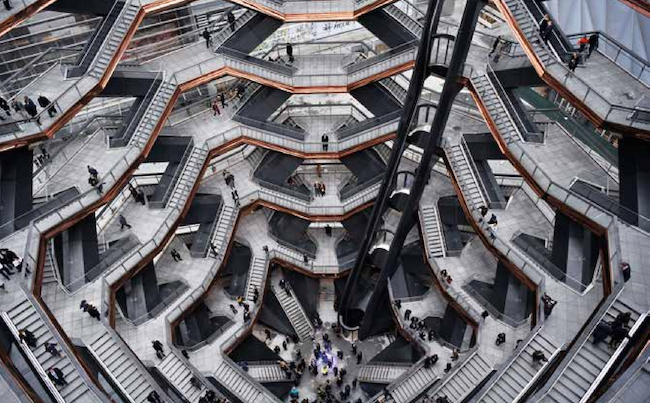 The ancient Greeks based entire cities around the idea of improving our health through design, but somewhere along the way these ideas were forgotten. In the latest edition of Overseas, Abi Millar asks whether the built environment can return to these ideals and make us healthier.

If you’d got sick in ancient Greece, you could have done worse than pay a visit to Epidaurus. A small city on the Argolid Peninsula, it was famous as the birthplace of Asclepius, the Greek god of medicine. It also played host to the best-known asclepion (healing centre) of the classical world.

After spending the night in the sleeping hall, where the god would purportedly visit you in your dreams, you’d report to a priest. He would prepare a cure for you based on your dream, with cures ranging from the surgical to the spiritual. As you recovered, you could attend a theatre performance or visit the athletics stadium, or recuperate in the public baths or gymnasium.

This asclepion, like all of those in ancient Greece, was deliberately placed somewhere scenic. Deep in a lush valley, with sea views and rolling hills, it was a world away from the crowdedness of the city. Health was about more than administering the right treatment. It was a function of the whole environment, with physical, spiritual, and social dimensions.

More than 2,000 years later, the concept of ‘integrative wellness’ is once again gaining traction. Under this template, mind is as important as body, and treatments should focus on the whole person. Relatedly, there has been a surge of interest in healthy environments, and ways of providing healthcare outside of an institutional setting.

The most obvious example is Maggie’s Centres, drop-in centres for cancer patients that are more domestic than medical in feel. The concept was developed in the mid-90s by the architectural critic Charles Jencks and his late wife Maggie Keswick.

As Jencks wrote in 2014: “Our commitment to art, architecture and healing stemmed from such direct confrontations as those we found at Epidaurus… the hidden tradition of Western culture that used to run very deep.”

He was talking about the confrontation between hope and fear, which in the past served as a great spur for healthcare design. Maggie’s Centres seek to tap into that tradition. Each centre, designed by a leading architect, provides its own creative take on Maggie’s original blueprint, and works to convey an ‘architecture of hope’.

“The brief that Maggie’s give their architects is very open – there is no set list of areas and specific requirements, but a beautiful little book that Maggie wrote about what a place for care might be like,” explains Alun Jones of Dow Jones Architects. “This is why all Maggie’s Centres end up being quite different. There is a list of the rooms that they would like, but these are described from the point of view of activity and mood rather than function. So there is a lot of freedom within an overall set of parameters.”

Dow Jones designed Maggie’s Cardiff, which opened earlier this year. As guests arrive, the first thing they will feel is the relief of being in a garden – calm and reflective, with deep views into the building. 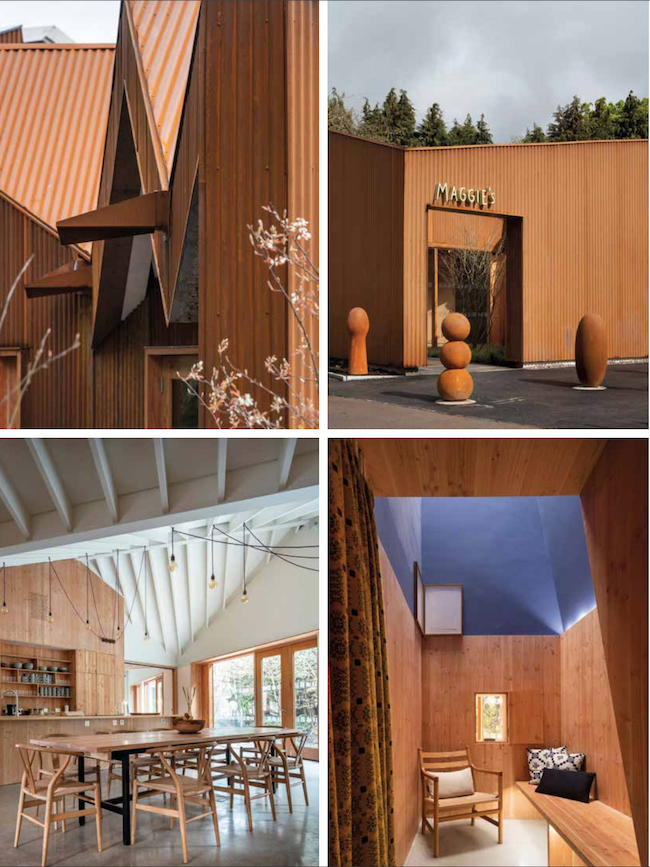 “The site is quite tough – it is the corner of a car park and surrounded by a sea of tarmac, cars, double yellow lines,” says Jones. “We wanted to make a building that would take you as far away from this context as possible, and also take away from your diagnosis or treatment, and project you into another place.”

The local landscape, he adds, is very distinctive, with blocky mountains covered in bracken that turns orange in the autumn. With its series of pitched roofs, and exposed weather steel, the building responds both to the mountains and to the industrial buildings nearby.

Meanwhile, the interior is organised around the ‘cwtch’, a tall and intimate roof-lit space with a homely kitchen table. (The word ‘cwtch’ has two meanings in Welsh – a small comforting space, and a cuddle.) The materials are soft and warm, the natural light abundant, and the layout takes the guest on a journey, with a sequence of special moments relating to a space, a piece of art, a piece of furniture or a view.

“I think the built environment plays a huge role in improving our health and wellbeing, but one that is quite difficult to describe,” says Jones. “Perhaps there is a sense of purpose about beautiful and well-considered things, which projects some sense of being cared for?”

Of course, people have always known that buildings impact how we feel, and that the environment can serve a healing purpose. The ancient Greeks knew it. The ancient Hindus knew it with their ‘vastu shastra’ (science of architecture). The 16th-century doctor Paracelsus knew it, writing: “The art of healing comes from nature, not from the physician.”

Even the Victorians – notorious for their squalid cities and Dickensian slums – had their sanatoriums, where people were quarantined for tuberculosis.

That said, the basic principle underlying the asclepeia has largely been forgotten, Maggie’s Centres aside. Most of the time, when we think about the architecture of health, we think about hospitals – institutional, sterile and not particularly welcoming places. With people living longer and the burden of chronic disease growing greater, it seems a pertinent time to ask whether we can recapture some Ancient Greek ideals.

Earlier this year, an exhibition at the Wellcome Collection in London, called Living with Buildings, posed a similar question. Looking not just at designated healthcare buildings, but also the relationship between health and architecture more generally, the exhibition prompted visitors to “look again at the things that surround us and to think about how our health relates to them”.

It’s a broad theme, but an important one. The United Nations estimates that, by 2050, 68% of the world’s population will live in urban areas. Architects designing for tomorrow will need to think about how cities can promote health, wellbeing and a sense of connectedness with nature.

“Something we’ve been working on is biophilia, which is humans’ inherent need to be close to nature,” explains Mat Cash, a group leader at Heatherwick Studio. “It’s really about trying to design for all the aspects of how a space makes you feel, as well as what you can see, and the human experience of a building.”

Heatherwick Studio is perhaps best known for the now defunct Garden Bridge project, which would have provided a plant-filled oasis along the Thames. However, this is far from the studio’s only attempt to ‘regreen’ a city. It is designing Google’s London headquarters, which will feature a huge roof garden and landscaped terraces. It is also overseeing the Pier55 project in New York: a park and performing arts venue on the Hudson River.

“It’s been interesting to see how the integration of nature into buildings has become such a key factor,” says Cash. “A lot of our projects are exploring that in new ways. We’re just completing a project in China, which is about bringing a park over a building and bringing new green life to a city. Particularly in Asia, as you get urban growth you need to make sure the parks and green space run at the same pace as the construction.”

He adds that the studio is particularly interested in public projects and the ways that people engage with buildings. Whether you need somewhere to take shelter from the elements, a bench to stop and rest, or a view out on to green space, all these small moments add up and define your overall experience.

For instance, the Vessel project in New York, which opened in March, was explicitly designed to encourage sociability. A honeycomb-like structure comprising a mile of public walkways, the project defies easy categorisation.

“A lot of public art isn’t very engaging for the public – it’s something you just stand and look at – and we were very keen on integrating participation,” explains Cash. “When I went out to the opening this year, it really was just a structure, but when people started to inhabit it, it took on a life of its own. It’s clearly creating an interesting platform for serendipitous meeting in the city.”

Given its focus on health and wellbeing, it is perhaps not surprising that Heatherwick Studio has also designed a Maggie’s Centre – Maggie’s Yorkshire, which is due to open next spring. In keeping with its focus on green space, the building will resemble a set of giant pot plants, featuring a series of curved structures with plant-covered roofs.

“The site is on quite a steep hill – it was one of the last green spaces on the hospital complex,” says Cash. “We were very conscious that, though we had these fantastic views out, we were going to bring more green space back to the site rather than taking it away.”

The brief, he says, was simultaneously straightforward and challenging – to create an intimate centre that could nonetheless accommodate more than 100 visitors a day.

“Hospitals can be large, quite intimidating buildings, so we wanted to take the large space and break it down into a series of smaller rooms,” says Cash. “It never feels like an institution, it feels as much like a home as it possibly can.”

With Maggie’s Centres now well established, it’s easy to see how they might inform tomorrow’s healthcare architecture. Charles Jencks has said that hospitals need backup – self-help organisations like Maggie’s that can displace some of their functions. After all, the asclepeia provided both clinics and temples, modern medicine and spiritual succor.

Arguably, the ancient Greeks were leagues ahead of us when it came to healthcare architecture, not least because they took such a broad view of what designing for health might mean. However, we are seeing a resurgence of creative thinking around the subject, which will surely stand us in good stead as we build for tomorrow’s challenges.