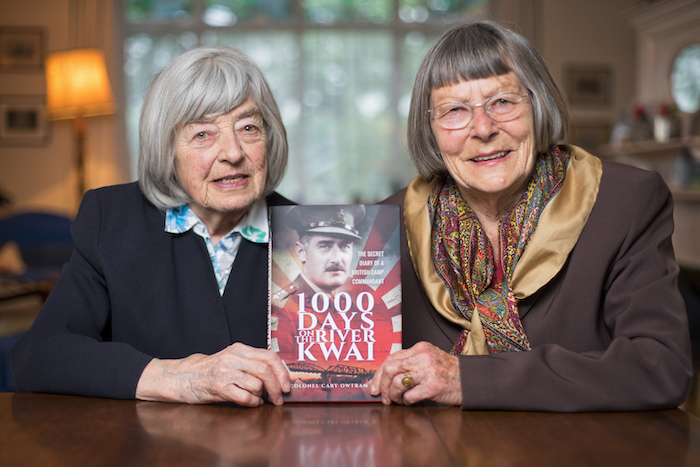 Join us to hear the remarkable story of Colonel Owtram, Commandant of the Chungkai PoW camp in the Second World War, as told by his daughters, who both worked for the Secret Service during the war.

To mark the 80th anniversary since the outbreak of the war, Patricia Davies (WRNS Special Duties Linguist & Interceptor, 96), a former BBC producer, and her sister Jean Argles (FA.N.Y/S.O.E Code & Cipher, 93), who were both involved in code-breaking during the war, are joined by historian Simon Robinson, who interviews them about their memories of the war, and their father’s experiences in the hands of the Japanese and his efforts to protect the POWs in his charge.

Colonel Owtram was one of 80,000 PoWs captured by the Japanese when Singapore surrendered in February 1942. He became Camp Commandant of the Chungkai camp, one of about a dozen camps along infamous Siam-Burma railway, tasked with its construction.

While at the camp, the largest along the railway with 8,000 starving men, he kept a secret diary which spoke of the responsibility he felt for those in his charge. By the end of the war, some 20% of those who had worked on the railway had died of malnutrition, dysentry, malaria and other tropical diseases.

Meanwhile, in England his daughters Patricia and Jean had both signed up to the war effort, eventually working on code-breaking. Join fellow members and guests on 2 September in the Princess Alexandra Hall to hear their story, as well as that of their father.