From the Archives: Member Misbehaviour 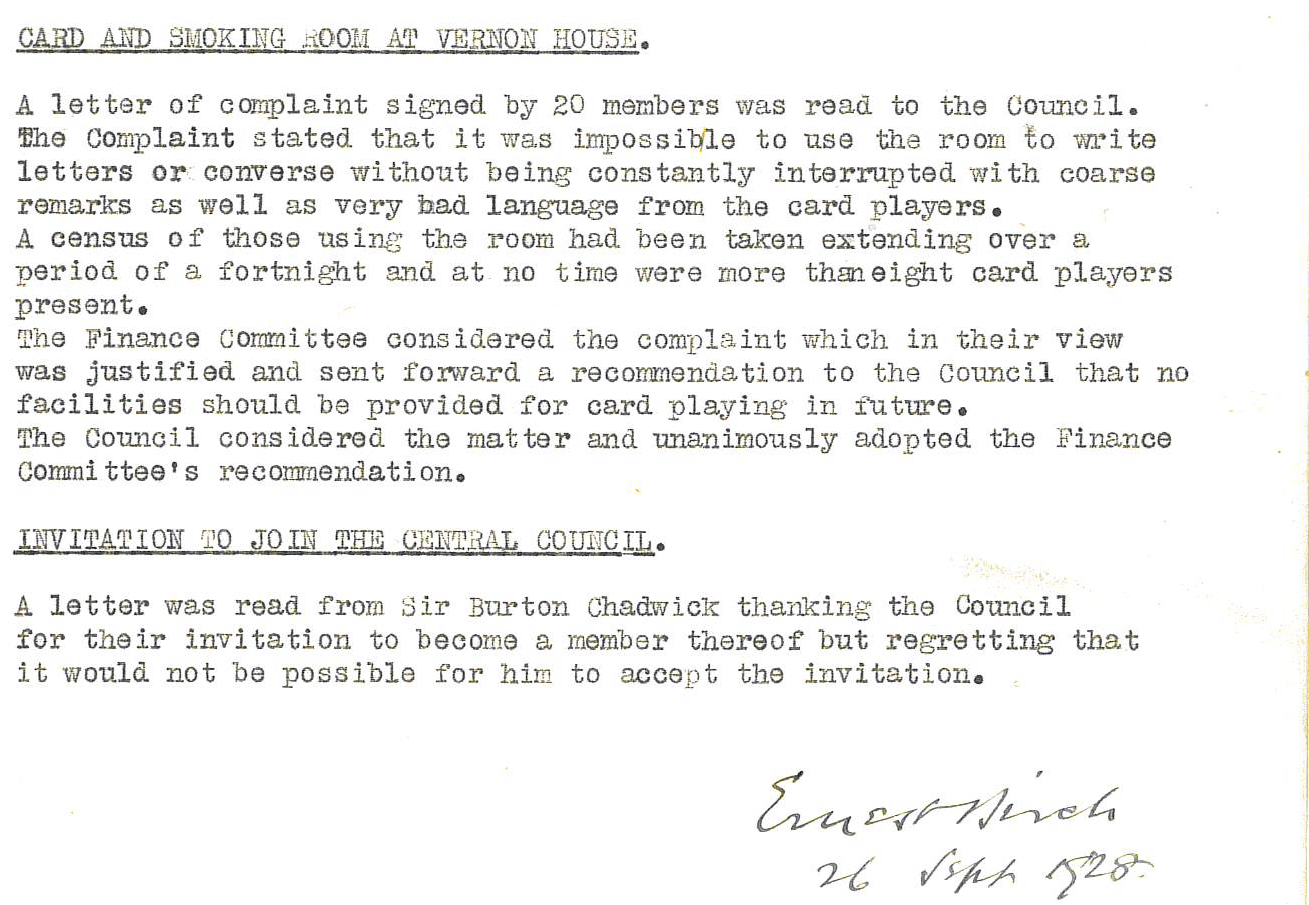 ROSL's Natalia Sedunova uncovers hiddens gems from the archives which detail the behaviour and misbehaviour of members past.

Reading through the old Central Council minutes of the Over-Seas League from the 1920s and 30s reveals what the agenda of its runners consisted of. A surprising amount of complaints submitted to the Council from members tells us about some peculiar incidents providing interesting insights into the moral judgements of those days, whilst the councillors’ measures taken in each case illustrate how responsive the leadership of the Over-Seas League was to the public enquiries.

In February 1927, three members submitted a written complaint on Mr. A. McLeish accusing him of cheating in a card game. Having invited them, as well as the culprit, to the Central Council meeting and given them the opportunity to speak, the Council decided to cancel the membership of not only Mr. McLeish, but also the woman who proposed him to membership. Testimony of Mr. and Miss Wrench of her ‘undesirable’ behaviour was enough to rid the League of the presence of both.

Already in March of the same year, a special Cardroom Committee was established to oversee fair conduct of card players. However, after the Council received a letter of complaint in 1928 from 20 members, pointing out that card players severely disturbed the atmosphere in the room with ‘coarse remarks as well as very bad language’, it decided to abolish any facilities for card playing in the clubhouse, meeting huge dissent from the members of the Cardroom Committee.

Usually, complaints were based on the immorality of people’s behaviour, especially regarding their attitude to women. For instance, in July 1937 a member’s subscription was decided to be returned and membership cancelled after he ‘behaved to several members of the female staff in an ungentlemanly and rude manner’. Another individual was judged in a complaint, because ‘different girls are always enquiring for him at Vernon House’ or waiting for him outside of premises, which disturbed other residents; the official reason given for his refusal of membership though was his undischarged bankruptcy.

In February 1938, a female member was refused renewal subscription and membership by the Central Council, as ‘the Chambermaid found an empty whisky bottle in the waste paper basket every morning, also about ten empty morphine phials.’ The culmination of anti-social behaviour in the Over-Seas premises was a fight, which occurred in November 1936:

‘Apparently, an argument arose, Mr. Sampson lost his temper and threw a glass at Major Wardley. In a general melee Mr. Iron was struck in the face by Mr. Sampson who then ran downstairs. A chair, two tables and a whisky goblet were broken in the struggle’.

As an instigator was a guest of the Over-Seas member, it was Mr. Iron who was held liable to pay for the damage. Interestingly, this case was investigated by the Finance Committee, along with many other misconduct instances. Nevertheless, it is evident that the Central Council did not hesitate to apply its right given by the Royal Charter to refuse annual subscription renewal in their uncontrolled discretion when the League’s reputation was at stake.

We're lucky that our members are generally a better behaved cohort these days!

Names have been changed.