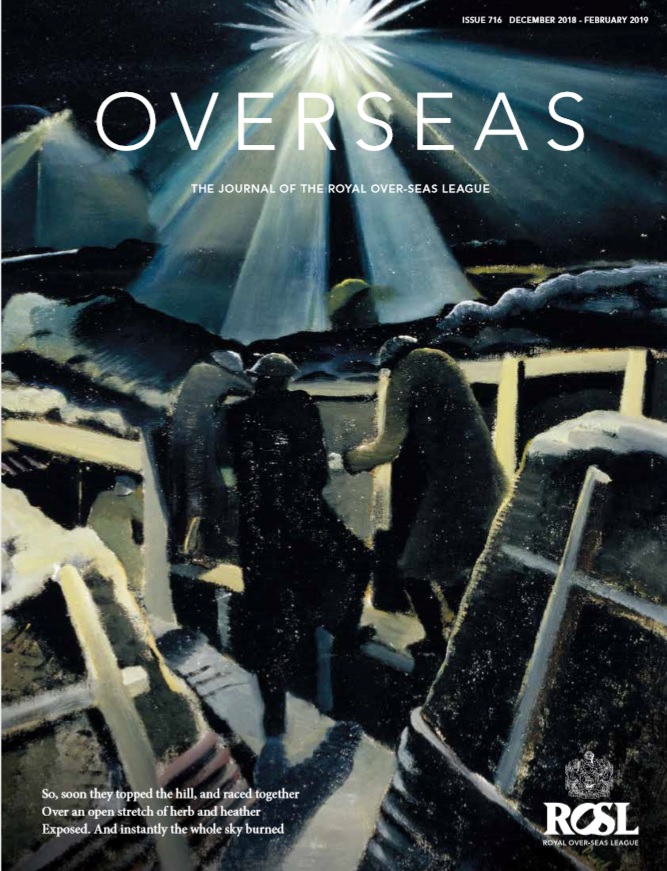 Over the past four years, the world has commemorated the centenary of the First World War in vivid and thought-provoking style, most notably in the UK via the installation by artist Paul Cummins of Blood Swept Lands and Seas of Red at the Tower of London, a moving depiction of the 888,246 British and Commonwealth servicemen killed in the war in the form of ceramic poppies.

ROSL’s own history is indelibly linked with the First World War, a period in which membership grew exponentially as the organisation sought to raise money for the troops fighting abroad. When the centenary of Armistice took place last month on 11 November 2018, ROSL hosted a series of events, which gave members the opportunity to join in the remembrance activities.

The new issue of Overseas has been dedicated to the memories of the war and the connection ROSL and its members has to an event which changed to course of history. During the course of the conflict the fledgling club raised the equivalent today of £50,000,000 for comforts for the troops, some 350 aircraft for the Royal Flying Corps, as well as Red Cross Hospitals for wounded officers. We look back through the archives to examine how the club mobilised its members to get behind the war effort.

An artistic expression such as Blood Swept Lands and Seas of Red may have seemed impossible at the time of Armistice in 1918, with so many of the most promising artists, poets, writers and musicians of the day lost in the fighting. Of those who survived, their experiences of trench warfare left an indelible mark on their work. In the issue, Abi Millar looks at how the tone of artworks changed over the course of the war, with particular reference to poet Siegfried Sassoon and artist Paul Nash. Stephen Johns, Artistic Director at the Royal College of Music, focuses on the generation of musicians and composers who saw their art follow a similar trajectory as the fighting took its toll.

Read all this and more in the new issue, which has already started to land on members' doorsteps, as we remember those who served throughout Britain and the Commonwealth. Lest we forget.

If you haven't yet received your copy, read the full issue online below.