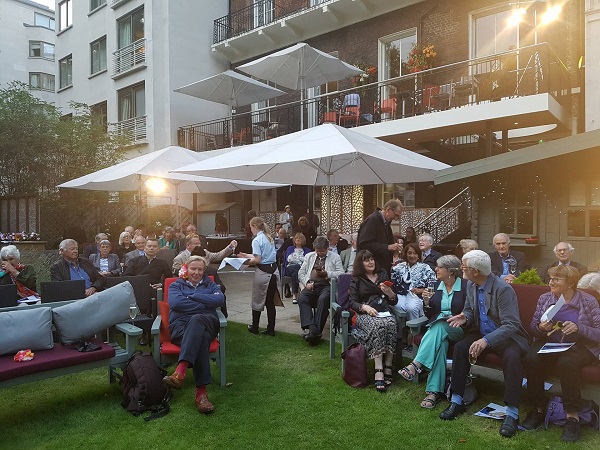 On Friday evening ROSL once again opened its doors to the Shakespeare Birthplace Trust's acting troupe. The group have visited us for the past two years with their renditions of As You Like it (2015) and Midsummer Nights Dream (2016). This year they performed for members their twist on Much Ado About Nothing which was set in the 1980s.

The actors included returning stars Richard Bunn as Benedick and Dogberry, Sarah Horner as Beatrice and Verges, Sam Lesser as Claudio, Peter M Smith as Don Pedro and the Friar, and Martin Tomms as Leonata and Don John. As usual their performances were faultless with a perfect blend of 80s references and Shakespearean wit. New comer, Lorna Jinks who played Hero and Borachio, was a perfect fit with the rest of the cast with her malevilant portrayal of Borachio and her innocent take on sweet Hero.

Despite being performed to the sounds of Cyndi Lauper, Billy Idol and Rick Astley Shakespeare's script, which the actors had kept mainly intact, sat well in the context of the 1980s and created a rather refreshing and interestering take on one of Shakespeare's greatest comedies. Some audience members found themselves a part of the play at one stage of another, adding yet another layer of depth and emotional investment into the lives of witty Beatrice, fool-hardy Benedick, love-struck Claudio and adoring Hero.

The troupe will return again next year with what promises to be an interesting performance of Romeo and Juliet. Keep a look out in the Overseas Journal and website for their performance date. In the mean time take a look at a few of our highlights from the night.