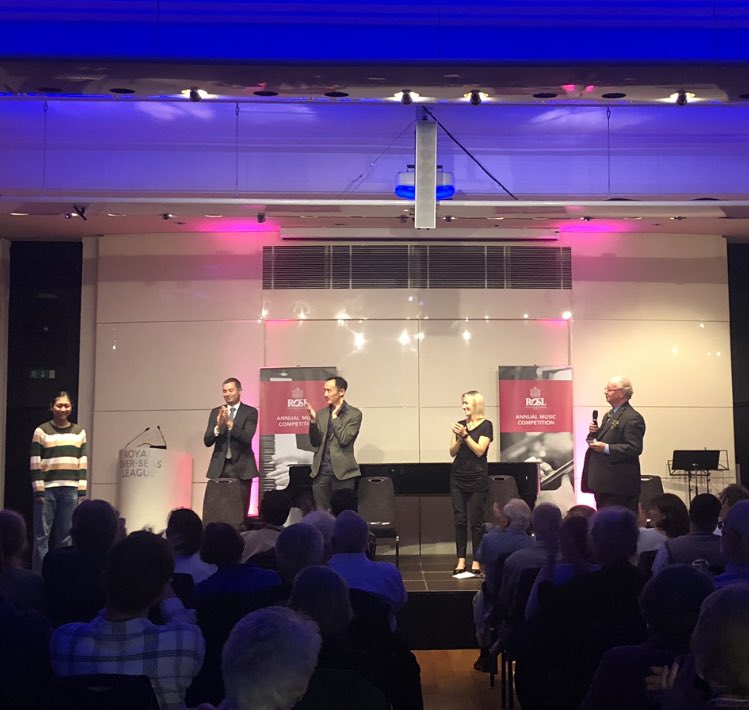 It may seem that last year's Annual Music Competition (AMC) has only just finished, but we're already underway with the 2021 edition. Last night, four soloists took to the Princess Alexandra Hall stage for the Wind & Brass Section Final, to find out who would take the first of four spots at the Gold Medal Final.

Competing were Aaron Akugbo trumpet, Lewis Banks saxophone, Lewis Graham clarinet, and Marie Sato flute, playing for the panel of adjudicators led by Gavin Henderson CBE, alongside Carol Jarvis, Chi-Yu Mo, and Geoff Parkin. It was such a pleasure to be able to welcome an audience back into the hall this year, to hear the wonderful music making on display.

First to take to the stage, trumpeter Aaron Akugbo used the opportunity to play works by Stanley Friedman and Gilere, accompanied by Harry Rylance on piano. Next up, Lewis Banks played works by three contemporary composers; Jay Capperauld, Andy Scott, and Graham Fitkin, with Imma Setiadi on piano.

The interval gave the panel and audience a chance to take in the incredible technical ability and musicality they had just witnessed, with Lewis Graham continuing the theme on stage alongside John Flinders piano, playing works by Denisov, Chausson, and Edward Gregson. Last but by no means least, it was the turn of Marie Sato, accompanied by Kumi Matsuo piano, who chose a programme of Dutilleux, J.S Bach, and Liebermann.

The warm reception each musician received was testament to the high quality on diplay, making the job the judges all the more difficult. As they retired to consider their verdict, the audience enjoyed wine will awaiting the result.

In the end, it was London-born Marie Sato who took away the top prize; The Dyers Company Award for Wind, Brass & Percussion in Memory of Lady Barbirolli, and secured her place in the Gold Medal Final. Marie is currently studying at the Royal College of Music under Adam Walker flute and Stewart McIlwham piccolo. She became prinipal flute of the National Youth Orchestra of Great Britain at 15, has performed around the world and appeared on BBC Radio 3.

Such was the quality of the Section Final, trumpeter Aaron Akugbo also took home the Philip Jones Prize for exceptional Brass Playing, congratulations!

To see how will take the remaining three spots at the Gold Medal Final, join us for the Section Finals every Tuesday night. Book your tickets at www.rosl.org.uk/amc.

This year's ROSL Christmas cards feature a specially-commissioned cover of our Patron HM The Queen by artist Anna Rumsby, entitled A Winter Walk with Corgis.

AMC: Soprano Milly Forrest Books Her Place in the Final

Last night saw the second of this year's Annual Music Competition Section Finals, with soprano Milly Forrest becoming the second soloist to make it through to the Gold Medal Final.

Long sought after by members, we are pleased to announce that you can now access and use the gym at Nordic Balance, located less than 10 minutes away from the club.