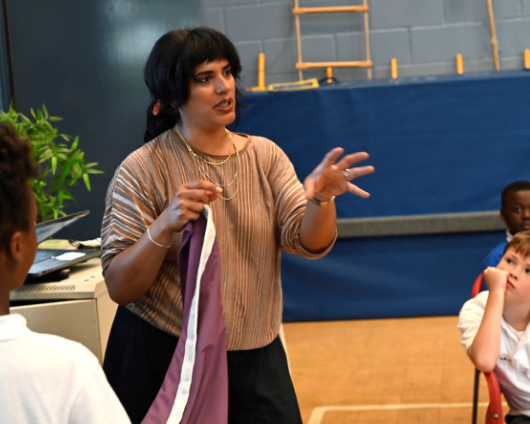 Image courtesy of the artist

The day started in the Main Assembly Hall as Nisha presented a slideshow of images from her last research visit. Previously, Year 5 students were asked to bring an object to school that represented themselves and their heritage. These "show and tell" objects were photographed by Nisha and now the children could see their collective items on the TV monitor for the first time, creating much energy and excitement as each student, in turn, recognised their image. "Can anyone tell me what a symbol is?" asked Nisha to the class - this became a topic of much discussion.

After asking what pupils can expect for the rest of the day's workshop Nisha responded, "We'll be thinking about portraiture and representation, using a range of materials to create our own mini-flag designs that symbolise things that are important to us as individuals." 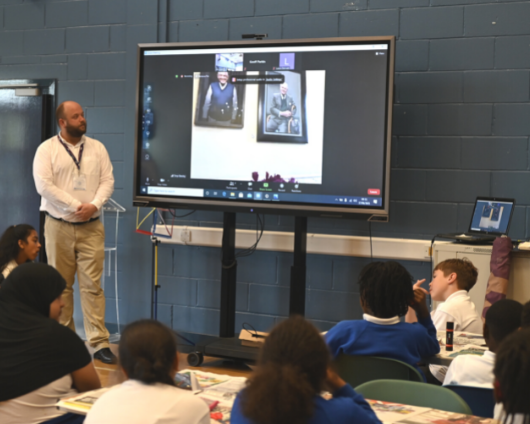 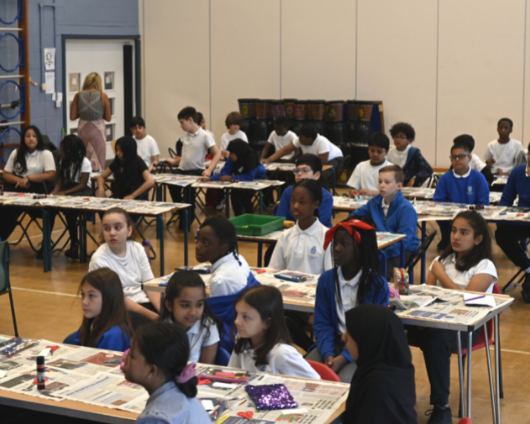 Next was a virtual tour of Over-Seas House, the home of Royal Over-Seas League and its clubhouse for members. Due to COVID restrictions ROSL ARTS were unable to invite Year 5 to a guided tour of the building in person. However, with the assistance of a mobile phone and video link the children were soon calling out directions, shouting "STOP!" to look closely at historic features and spotting the portrait of ROSL Patron Her Majesty Queen Elizabeth II in the entrance. They were directed to the flag poles situated outside the headquarters, which have already become a point of focus in Nisha's residency. "There are prominent flags outside the club in Mayfair. Flags and concepts of nationhood and belonging also seem to resonate with the pupils at Riverley. I thought it was worth exploring in more depth", Nisha commented. At the front of the hall she unfurled a Royal Over-Seas League flag with a Year 5 volunteer, they immediated recognised the scale from the live video tour. 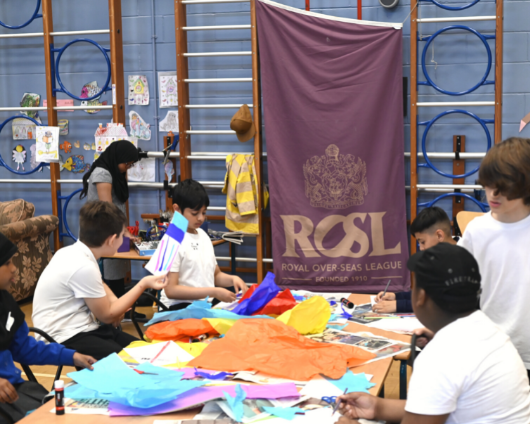 The task was set - using art supplies and paper each pupil would begin to sketch out ideas for their own personal flag. Thinking about what was important to represent, no subject was out of the question whether it be history, hopes for the future or hobbies and interests. The conversations at this stage remain in development and the children will lead how the project evolves as Nisha acknowledged, "It will take a while to draw out I think. The themes I'm covering are difficult - yet vital. I want our relationships to build, trust is important, this will happen as we work more together." 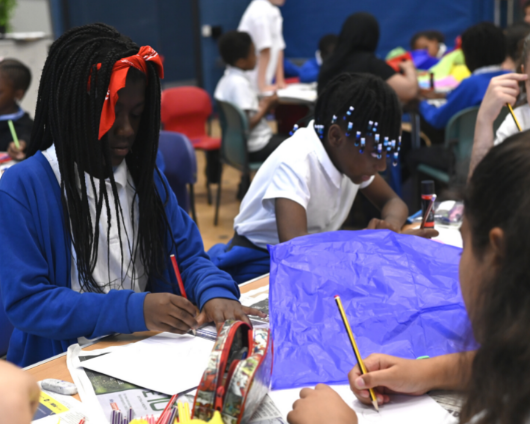 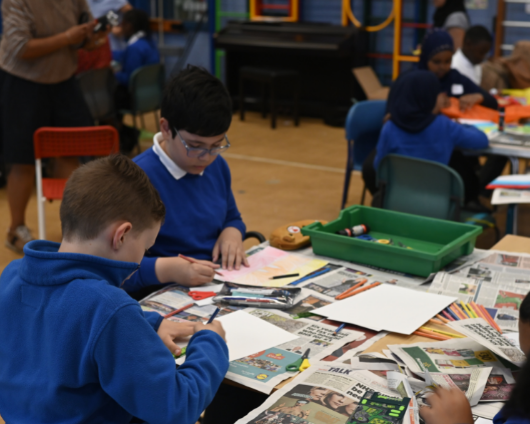 Towards the end of the early session a patchwork of flag identities were already beginning to emerge; themes of nature, sport, home, animals, patterns, fashion and colour were expressed with the art materials made available. With each design came a very eager student explaining what everything meant, some voices were recorded by microphone during the morning by Nisha. 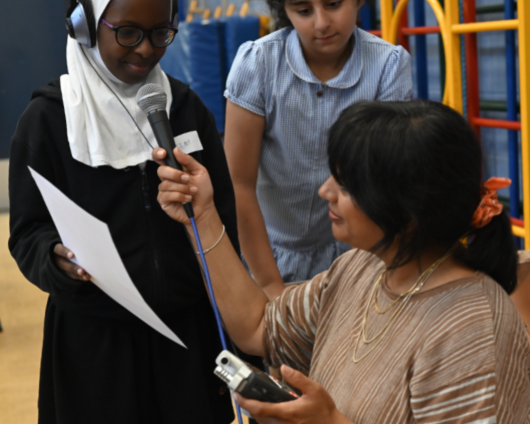 Upon asking Nisha what is next for Riverley in the follow up workshops and forthcoming Griffin Arts Festival, she responded, "I'm adapting the sessions as we move forward to reflect the kids' input. Next week we'll be doing some action painting and the week after that moving into experimental sound work. Should be fun!"

We also look forward to much more fun in the forthcoming weeks! 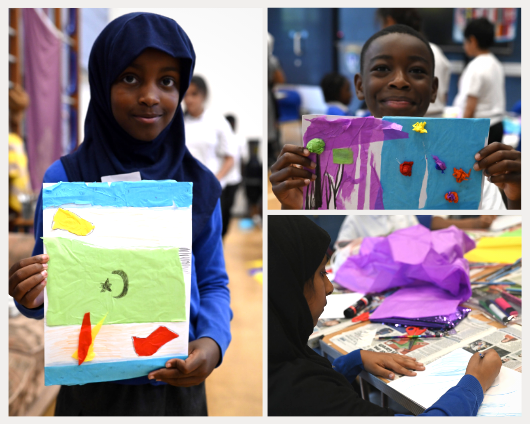 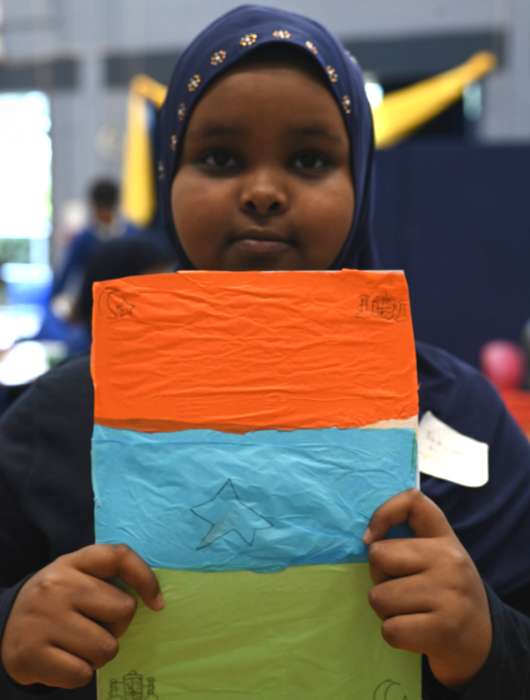 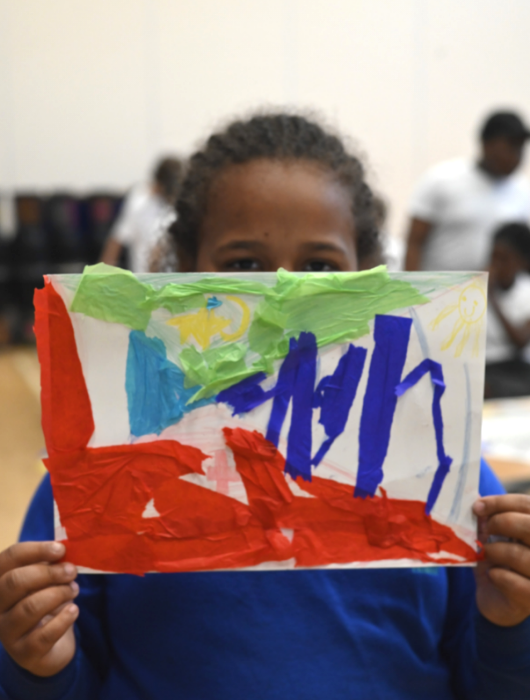