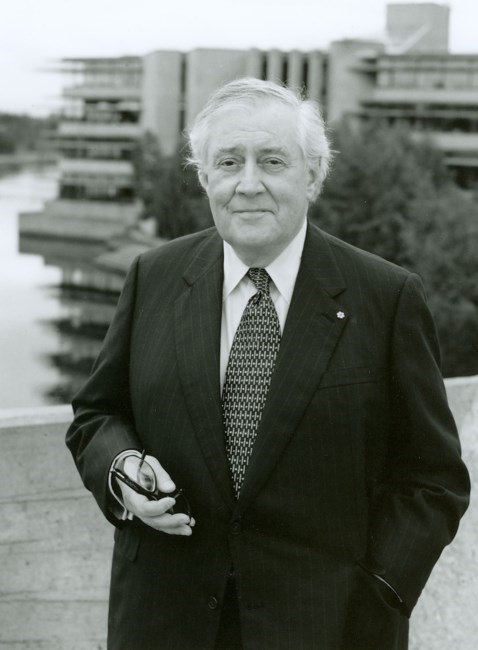 We are sad to announce the passing of prominent Canadian member Thomas Symons.

Thomas H. B. Symons was a teacher and educator. Founding President of Trent University in Peterborough, Ontario (1963-72), he went on to lead many Canadian and international organisations and initiatives. Born in Toronto, the son of Harry Lutz Symons and Dorothy (Bull) Symons, educated at Crescent School, Upper Canada College, the University of Toronto Schools, Trinity College, University of Toronto and Oriel College, Oxford University. While at Trent, Tom was involved in a wide variety of public issues. He helped establish a landmark Ontario-Quebec Educational Exchange Program that continues today, led the "Symons Commissions" which laid the basis for French-language education in Ontario and began his lifelong interest in indigenous and northern studies and supporting Canada's indigenous communities. After Trent, Tom continued to act as chair of Robert Stanfield's policy advisory committee for the federal Progressive Conservative Party. He also undertook the Commission on Canadian Studies for the Association of Universities and Colleges of Canada, producing the "Symons Report," To Know Ourselves, and was chair of the Ontario Human Rights Commission, initiating a fundamental review of the Ontario Human Rights Code which transformed the landscape of human rights in Ontario. Tom served as a leader of many organisations, including as chair of the Association of Commonwealth Universities, the United World Colleges, the Historic Sites and Monuments Board of Canada, the Ontario Heritage Trust, the National Statistics Council of Canada, the National Library Advisory Board, the Board of the Bata Shoe Organization and the Peterborough Lakefield Police Services Board. For over 30 years, he was a board member of the Broadview Press. Awards and honours he received include Companion of the Order of Canada, the Order of Ontario, Fellow of the Royal Society of Canada, Fellow of the Royal Geographical Society, the Queen's Silver, Golden and Diamond Jubilee Medals, a Vatican Knighthood in the Order of St. Sylvester and numerous honorary degrees from universities in Canada and abroad. He was elected a trustee and an honorary fellow by Oriel College, Oxford University and a visiting scholar and fellow by Cambridge University. In 2004, the Confederation Centre of the Arts established the Symons Medal which is awarded annually to an individual who has made an outstanding contribution to Canadian life. Tom loved Peterborough. No matter what opportunities came his way, he refused to move away from his community. He enjoyed entertaining in his home, Marchbanks, welcoming people in for tea or something stronger. He also loved Prince Edward Island - in particular, the Confederation Centre of the Arts and Shaw's Hotel, which he stumbled across when he was traveling as a young man and to which he returned almost every year thereafter for the rest of his life.

Courtesy of The Peterborough Examiner

Watch last night's fascinating public affairs talk from Camilla Tominey again here. Camilla is an Associate Editor of the Daily Telegraph, a Royal expert for the American television network NBC and a seasoned Royal Commentator for broadcasters in Britain and around the world. Get insights into her career covering both politics and the Royal Family and what the future holds for the younger members of the Royal Family including Harry and Meghan.

What You've Been Waiting For

Following news from the UK government on the success of the country’s vaccine programme, we now have a route out of lockdown and that means the reopening of ROSL’s clubhouse from 17 May.

We are sad to announce the passing of prominent Canadian member Thomas Symons.