From the Archives: ROSL’s Castle Next Door and Drama on the Roof 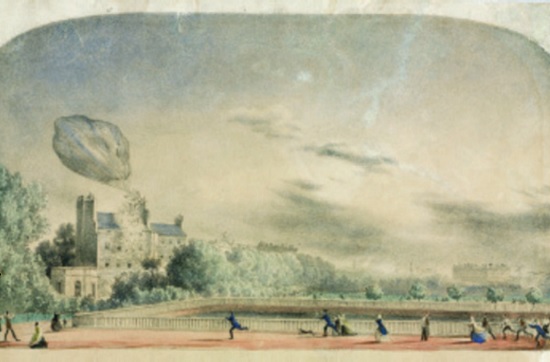 Margaret Adrian-Vallance looks at old prints of Over-Seas House showing the Gothic castle next door and a drama on the roof.

In June 1851 a hot air balloon carrying Mr. and Mrs. Graham crashed onto the roof of Rutland House (then known as 16 Arlington Street) and caused considerable damage as depicted in a lithograph of the same year. The balloon then bounced off onto some chimney stacks where the basket and the Grahams became stuck.

Damaged on take off from a race course near the Great Exhibition, the balloon had managed to skim the trees in Kensington Gardens and nearly landed safely in the Park before a ‘boisterous wind’ took it ever upwards.

Hundreds of people watched as the Grahams were eventually rescued by the police via Park Place.

Although hot air balloons were not unknown at the time - the first was launched in 1783 by Pilatre De Rozier with a sheep, duck and chicken as passengers - this precarious flight was big news.

As the agitated Grahams approached 16 Arlington Street in their basket, they would have seen the Gothic splendor and turrets of Pomfret Castle looming up at no 18.

The castle was commissioned in 1757 by the Countess of Pomfret, nee Henrietta Louisa Jeffreys, grand daughter of the famous ‘Hanging Judge’ Jeffreys. Her love of all things Gothic made for a wonderfully incongruous addition to the sky line.

Nestling between the Castle and Rutland House is The Gatehouse which was then the main entrance to Rutland House. It can still be seen at the end of Arlington Street, just past Le Caprice restaurant.

When it was built in 1736 it was a great novelty to have a gatehouse with a court yard and stabling at the front of a house. These were usually positioned at the back. The design by the architect James Gibbs caught on in a big way. It was convenient, gave a house privacy and muffled the sounds from the street.

Although the fairy tale castle has been replaced by modern buildings and a cavernous car park, Rutland House, Vernon House, and William Kent House are still pleasingly recognisable today.