Woman of the World 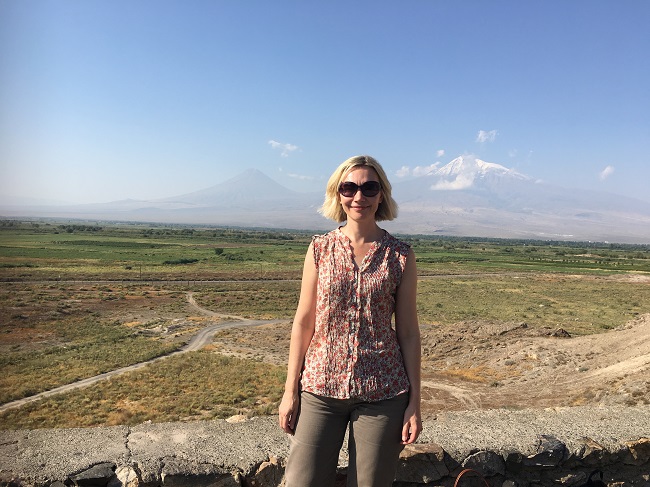 Despite the unprecedented circumstances in which ROSL's new Director-General takes up her position, Dr Annette Prandzioch’s career in law, the charity sector and academia has uniquely prepared her for taking on the role. In the new edition of Overseas, Mark Brierley finds out the route Annette took to Over-Seas House and what her plans are for the club post-lockdown.

How does one go from working as a barrister, to heading an international members’ club? Perhaps not the straightforward career trajectory you might expect, as Annette readily admits, but one that has led her to ROSL nonetheless, and combines her experience and her interests seamlessly.

“There’s been one common thread through my career and my life; it started at university, I had a deep interest in international relations,” she explains. “While studying and after graduating I had a lot of work experience in international organisations, both in Europe and in Washington DC, and worked with people from a variety of different nationalities and backgrounds.”

That interest has been deepened by a passion for travel, often away from the tourist trail, taking in Africa, Asia, the Middle East and the Caucasus. “I love to travel, particularly off the beaten track. You meet people, enjoy their hospitality, learn about their culture, it’s about friendship. So I’ve always had this interest, this passion for engagement in the world at large.”

That international flavour is something ROSL is very proud of and was an obvious draw for Annette, so after 18 years as a practising barrister working in commercial and property law, she began to look for new opportunities, which really maximised her exposure to that world. “I wanted to engage professionally with that world, so that led me to take up the role of Chief Operating Officer of the Royal Commonwealth Society. In my role, I built up collaborations, in particular with the High Commissioners and organisations with international outreach. It was the time of the Brexit referendum, and the enhanced interest in the Commonwealth was palpable.”

From there, a role at the newly launched International School for Government at King’s College London as Head of External Relations and Business Development further scratched that international itch.

“Because it’s a brand new school within the university, there to skill up civil servants and policy makers from across the world, it has really meant that I’ve been able to contribute to the strategic direction of the school and establish some critical first relationships. In particular, I brought to bear my Commonwealth knowledge and connections, designing a Commonwealth civil service training programme and working with the Rwandan Government and High Commission in London to obtain the President of Rwanda’s support for this programme. President Kagame announced at the School that the programme would be launched at CHOGM in Kigali, unfortunately postponed due to the current COVID crisis.”

Continuing that international outward-looking career with experience in the Commonwealth, in addition to a long-held passion for music and the arts in her next career move would be a tall order, but ROSL fit the bill perfectly.

“That’s why I really relished taking on this role at ROSL. For me, this is a natural progression and my dream job! I love ROSL’s ethos of international friendship and I really have practised that throughout my life and career,” she confirms. “I look at the avenues through which ROSL fulfils that ethos; the Commonwealth; music and the arts, the wide of reach of ROSL though its branches; and of course, the ROSL Trust and the educational work it does. These are all things that make ROSL unique and special.”

With much of her predecessor’s time as Director-General spent addressing the structural challenges at ROSL, both physical and organisational, in terms of the Master Buildings Strategy and Governance Review approved at this year’s AGM, Annette will look to continue the groundwork laid down by Diana, while developing those pathways which further develop ROSL’s ethos, and also finding new avenues for growth.

“I would like to pay tribute to Diana, she has put a lot of hard work into addressing those challenges. They will form part of her legacy. And now she has handed the baton on to me, I think it’s important we build on them, particularly the Master Buildings Strategy. We need to see that through.”

In fact, her career in law could once again prove invaluable to the stewardship of Over-Seas House going forward. “In 2018, I was appointed a Governing Bencher of the Honourable Society of the Inner Temple, one of the four inns of court, the professional associations for barristers and judges.”

Inner Temple is currently undergoing a major construction project at its site off Fleet Street in London. “As part of the governance of the Inn I voted to redevelop the listed Treasury Building, located at its heart, in order to create state of the art educational facilities. It’s a major project, continuing over a number of years. It’s given me a good insight into the Master Buildings Strategy we have in store at ROSL.”

There’s more to her plans than picking up where Diana left off. The coronavirus pandemic has also created new opportunities for ROSL to grow its membership, both in terms of individual members and corporate members, through new partnerships and collaborations, which Annette is keen to develop.

“The last few months have been a challenging time for ROSL, as they have been for many organisations. My first priority, working with my amazing Senior Leadership Team, has been to reopen the club safely and build member confidence to return and use the club.

That will be achieved through by supporting and nurturing our existing partnerships, reciprocals and importantly, the branch network, as well as welcoming new ones. “I look forward to getting out and about – whether physically or by zoom – to raise the profile of the Royal Over-Seas League.”

With the clubhouse reopened and international travel beginning to unlock once again, Annette stands ready to welcome members and guests from all corner of the world, and strengthen those bonds of international friendship for which we all know and love ROSL.

Read more articles like this in the new edition of Overseas here.