The Relevance of the Commonwealth in the 21st Century

HE Ms Yamina Karitanyi, High Commissioner for Rwanda to the United Kingdom, discusses Rwanda as a modern Commonwealth nation, the challenges of reconciliation after conflict and the opportunities presented by being the host of CHOGM 2020.

Rwanda joined the Commonwealth in 2009; a former colony of Germany and Belgium it was the second country to be admitted without a constitutional link to Britain. So, just how important were the political, economical, cultural opportunities offered by the Commonwealth to Rwanda then, as part of the healing process for a country that had been torn apart by genocide? And how important are they now to help retain talent and tackle migration for one of the fastest growing economies in Africa.

In conversation with Dr Sue Onslow, Deputy Director of the Institute of Commonwealth Studies, HE Karitanyi will speak about Rwanda’s resilience, the forgiveness shown by the people, and the vital part women have had to play in the regeneration and rebuilding of a government and a nation. Join us and be part of the conversation. 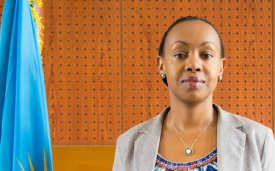