This event has been postponed due to illness. We very much hope to reschedule in the near future, so keep an eye on our events page for more updates.

To mark the 80th anniversary since the outbreak of WW2, two remarkable veteran sisters, now in their nineties recall their father Colonel Owtram and his fascinating secret war diary, kept hidden whilst British Camp Commandant of a Japanese POW camp.

Patricia Davies (WRNS Special Duties Linguist & Interceptor, 96), a former BBC producer, and her sister Jean Argles (FA.N.Y / S.O.E Code & Cipher, 93), who were both involved in code-breaking during the war, are joined by historian Simon Robinson, who interviews them about their memories of the war, and their father’s experiences in the hands of the Japanese and his efforts to protect the POWs in his charge. 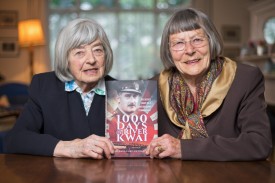