We are excited to present our second rendition of the charity art exhibition and sale – Incognito. Following the success of the inaugural Incognito exhibition in 2016, which saw 127 artworks donated from established and emerging artists, celebrities and ROSL members, generating sales that raised enough money to build a student hostel in Namibia’s Northern Kalahari, ROSL has once again invited artists from around the world to create and donate for a great cause.

The ‘postcard’ artworks will be exhibited anonymously in Over-Seas House London, from Tuesday 11 December, with the sale beginning at 6pm that evening. Each artwork will be sold (on a first come, first served basis) for just £50 and the artist name will only be revealed after the artwork is purchased.

Alongside the postcards will be exhibited the work of Eusebio Sanchez, a Spanish artist and graduate of the Royal College of art who currently lives and works in Brighton. Sanchez won the FRESH award in the last British Ceramic Biennial in 2017 with his work exploring the process of making ceramics and producing colourful, playful shapes that embrace the materiality of the clay. One of Sanchez’s works will be auctioned off in a silent auction with all the money raised going to support the same great causes as Incognito.

All the money from the exhibition will go to support ROSL’s Golden Jubilee Trust Fund (Charity No.306095) and their education work in marginalised areas of Botswana, India, Namibia and Pakistan over the next two years - with a special emphasis on education for girls from poor families in rural areas. These are areas where ROSL already has established projects and on-site monitoring in place which ensures that the money makes a real impact. 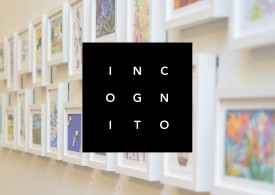