Mistresses is the story of the women who shared Charles's bed, each of whom wielded influence on both the politics and cultural life of the country. From the young king-in-exile's first mistress and mother to his first child, Lucy Walter, to the promiscuous and ill-tempered courtier, Barbara Villiers. From Frances Teresa Stuart, 'the prettiest girl in the world' to history's most famous orange-seller, 'pretty, witty' Nell Gwynn and to her fellow-actress, Moll Davis, who bore the last of the king's fifteen illegitimate children. From Louise de Keroualle, the French aristocrat - and spy for Louis XIV - to the sexually ambiguous Hortense Mancini. Here, too, is the forlorn and humiliated Queen Catherine, the Portuguese princess who was Charles's childless queen.

Linda Porter has a B.A. and a D.Phil from the University of York. She spent nearly ten years lecturing in New York, at Fordham and City Universities among others, before returning with her American husband and daughter to England, where she embarked on a complete change of career with BT for over 20 years. Upon her early retirement, she went back to historical writing as well as reviewing for the BBC History Magazine, The Literary Review and History Today. Mistresses is her fifth book.

You can buy a copy of the book here.

Register for the talk below, you will receive the link to the talk via email about two hours before it starts. 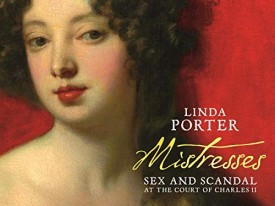