Online Book Talk: Tales from the Himalayas by Henry Edmundson

Henry Edmundson will give an online talk about his fantastic book, Tales from the Himalayas.

After over five decades of trekking and climbing in the Himalayan mountains, Henry is in a position of authority to mark the changes that have occurred over time and how people from various walks of life have been impacted by them. Having developed an affinity and understanding of the people he has interacted and associated With remarkable pictures, illustrations and maps, Henry Edmundson has brought to life each of these stories [religion, science, politics, society]. The gripping accounts, his insight and depth while presenting an understanding of the entire Himalayan region is unique and outstanding. This book is a rare combination of history, geography, society and politics that can cater to a wide range of audience.

Since 1965, Henry Edmundson has climbed and trekked in the Afghan Hindu Kush, The Pakistan Karakoram, and the length and breadth of the Indian, Nepalese and Bhutanese Himalaya. He is a member of the Alpine club, and the Himalayan club, and is a fellow of the Royal Geographic Society. He resides in Cambridge, in the UK.

Register for the talk below.

Image Caption: In 1956, the CIA committed to assisting the Khampa guerrilla campaign against the Chinese occupation of Tibet. In the 1960s, the Americans helped set up a major base for guerrilla activity in the remote area of Mustang in north-west Nepal. The photograph shows the leader of the Mustang force, Gyan Yeshe, and the overall operations chief of the Khampa campaign, Lhamo Tsering , (fourth and fifth from left). They stand with other guerrilla commanders at a pass overlooking Tibet in the early days of the Mustang operation. 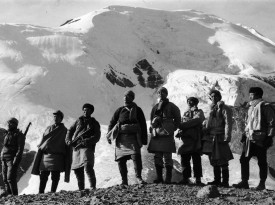