ROSL is thrilled to partner with Fane Productions to offer an online talk with Armistead Maupin and Sir Ian McKellen.

We are excited to share the bestselling author and activist, Armistead Maupin in conversation with Sir Ian McKellen.

Maupin’s iconic and ground-breaking series Tales of the City was first published in the 1970’s as a column in the San Francisco Chronicle and the novel series has been taking the literary world by storm ever since. A key figure in US popular culture and one of America’s greatest storytellers, Maupin recounts his favourite tales, offering engaging observations on society and the world we inhabit. Ian McKellen is an international award-winning actor across theatre, cinema, and television. He has been an eloquent advocate for gay rights since he came out in 1988 and co-founded Stonewall, the charity which lobbies for legal and social equality for gay people. He was appointed Companion of Honour ‘for services to Drama and Equality’ in 2007.

ROSL is thrilled to partner with Fane Productions to offer a series of online talks and interviews featuring celebrated authors, actors and personalities direct to members and guests in the comfort of their own home. All events are filmed to the highest quality, delivering an at-home cinema-style experience. 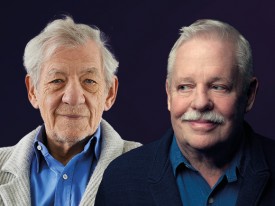