Book Talk: The Walls Have Ears by Dr Helen Fry

In commemoration of the 75th Anniversary of VE Day, historian Dr Helen Fry discusses her book, The Walls have Ears: The Greatest Intelligence Operation of WWII. It explores some little known aspects of the work British intelligence carried out, considered one of the greatest deceptions of WWII.

During WWII, British intelligence bugged the conversations of thousands of German prisoners-of-war at three stately houses, including Trent Park in north London. At the heart of the deception were Hitler’s Generals captured from the battlefields after 1942. In an astonishing turn of events, they were housed in luxurious conditions and were lulled into a false sense of security. They relaxed and became unguarded in their conversations, and inadvertently gave away from of Hitler’s most closely guarded secrets, including discussions about V1 (‘doodlebug’), V2 and atomic bomb programme. For over 60 years the secret listeners (German-Jewish émigrés who had fled Hitler) never spoke about their work, not even to their families. They died, little knowing that they, alongside Bletchley Park, not only shortened the war but helped toward the victory on VE Day. Having worked through the declassified files, historian Helen Fry sheds light on one of the little-known, but greatest deceptions of WWII. 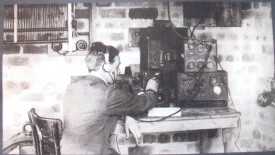