Raised in a Lancashire country house in the 1920s with a life of nannies, governesses and tennis parties, life was to change dramatically in the late 1930s with the arrival of two Austrian Jewish refugees.  Soon the sisters become fluent in German, this was alter their lives forever.

With the outbreak of war, Patricia volunteered for the Wrens and was posted to top-secret listening stations along the British coastline. In support of Station X:  Bletchley Park, she was tasked with intercepting German shipping radio in a bid to crack the seemingly impenetrable Enigma Code. A skill she will demonstrate to club members using the same equipment she used in WW2.

Meanwhile her sister Jean's quick brain for crossword solving lands her a secretive role as Code & Cipher Officer in the First Aid Nursing Yeomanry for S.O.E (Special Operations Executive) . At just 18 years of age, Jean was posted to Cairo, before moving on to Italy to aid the Partisan and allied agents fighting against the Nazis.

Following the war, Pat studied at st Andrew’s, Oxford and Harvard. Later becoming a journalist and TV producer for University Challenge and Sky at Night. Most recently she was awarded a Légion d’honneur for work supporting D Day. Jean went to Austria after the war and witnessed a war trial and then supported the resettlement of refugees before becoming a social worker and finally Lancaster Universities first Career’s advisor. 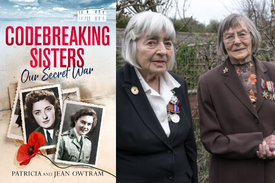